The Natural Diamond Council’s “For Moments Like No Other” campaign made its worldwide debut during the first-ever virtual Emmy Awards on Sunday night. Starring Cuban-Spanish actress Ana de Armas, the 30-second spot emphasized how diamonds are not solely the purview of romantic interests or formal occasions. They are meant to celebrate every type of meaningful connection. 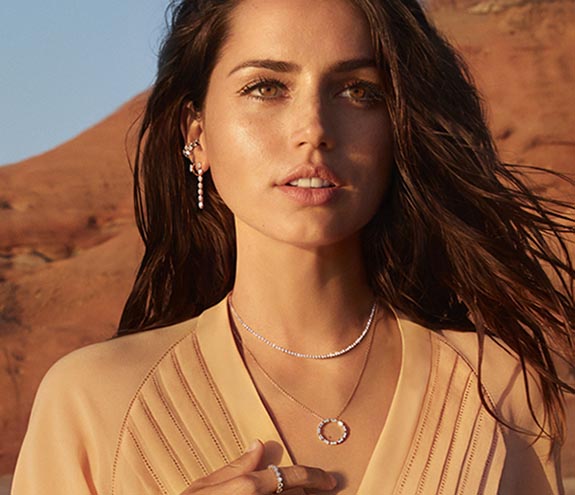 This new campaign marks the first time the Natural Diamond Council (NDC) has employed a Hollywood headliner as a brand ambassador. The rising Hollywood star will be appearing opposite Daniel Craig in the James Bond thriller, No Time to Die, which is scheduled to be released on November 20, 2020.

According to the NDC, Armas was approached for the project because she epitomizes an ascendant, free-thinking generation. Her elegant, effervescent and easygoing demeanor reflects the next chapter in the history of natural diamonds — where traditional tenets of diamond-wearing are dismantled and reimagined.

The commercial features the actress romping at a barefoot party in a fragrant vineyard and enjoying an intoxicating tangerine sunset along the Portuguese coast. All the while she is wearing diamond jewelry that catches and diffuses the glowing rays as the sun. This new diamond-wearing attitude is casual, fun, energetic, present and, most importantly, driven by connection and experience, according to the NDC.

“I love thinking of diamonds this way, as special emblems of even the small personal moments in our lives,” noted de Armas. “They represent joy and warmth and beauty.” 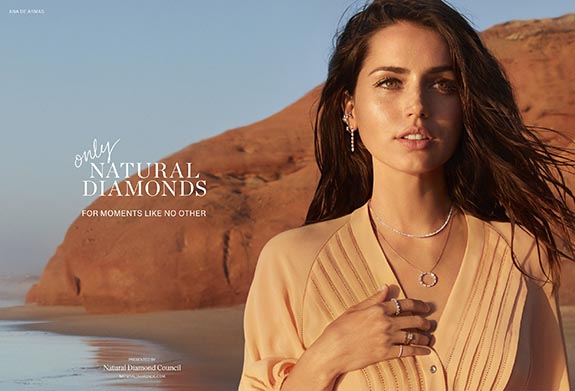 Following its Emmys debut, the campaign will be featured in print media, including Vogue and Vanity Fair‘s respective November 2020 issues, The New York Times, and at online publications ranging from Bustle to Who What Wear. It will, additionally, be featured on non-linear TV, from Hulu to Amazon Fire. The campaign will continue through the spring of 2021.

The ads are aimed at 21- to 45-year-olds with household incomes of $75,000 or more. The average consumer in that demographic range will encounter elements of the campaign at least seven times between September and the end of December, according to the NDC.

The Natural Diamond Council will also distribute campaign materials through its own channels, including its website, which will feature behind-the-scenes footage and an interview with de Armas. The site will also offer comprehensive information about the brands and designers represented in the commercials. The global campaign will run in the US, UK, China and India.

“Ana is a true talent, and the dynamism she exemplifies is exactly what we seek to do daily in our support of the natural diamond industry,” said Kristina Buckley Kayel, Managing Director of Natural Diamond Council North America. “This campaign redefines traditional diamond moments, celebrating a variety of personal connections with these natural stones. It’s a more contemporary approach to the diamond dream, for meaningful moments big or small.”